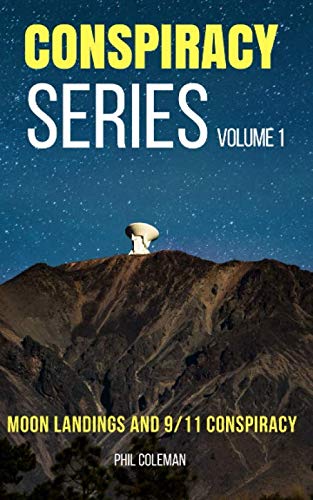 Featuring… *Moon Landings*9/11 Conspiracy
2 Great Books in 1!
Moon Landings
It would seem that there are astronauts who are as convinced as many others that there are alien civilizations out there. There are estimates that the number of civilizations to be as high as 100 million. Given the vast size of the universe, it is no wonder that there is confusion as to the number of civilizations there may be out there. No one really knows. If you check these sites you will find unconfirmed reports of Apollo 11 astronauts, Armstrong and Aldrin, seeing UFOs during the first Apollo mission to the moon. There are conversations from various Apollo landings from the astronauts to central control and back again which have been construed by some people as evidence of an unknown civilization that has been on the Moon. It is very unlikely that humanity is alone in the cosmos. Many books have been written and many side scientific papers published about this. This book only mentions these phenomena in passing. This book considers conspiracy theories, what they are and why they occur. It has a look at the backdrop to the whole Moon program, which was the Cold War. It outlines the Space Race of which the Apollo landings were the final episode, then it moves onto the question of whether the moon landings were faked, or whether they actually occurred. It concludes with an examination of the future space travel of man kind.
9/11 Conspiracy
To say the events of September 11, 2001, changed the world is an understatement. The global impact of the attacks that occurred in New York City, Washington DC, and Shanksville, Pennsylvania could never be measured. Out of the attacks came drastically increased security world-wide, rampant xenophobia, a war that might possibly never end, and forever damaged relations between the United States and the Middle East. In times of crisis and attacks such as these, people tend to look for answers as to why such events happened. In the case of 9/11, this led to rampant conspiracy theories about the attacks that even close to twenty years later, still prevail. However, the thing is – when you take a microscope to the whole thing, it doesn’t really add up. This begs the question; what was there to hide?

10 Times People Have Caught The Paranormal on Camera

THE HAUNTED CLOWN MOTEL IS EVEN SCARIER NOW | OmarGoshTV

5 Scary Paranormal Videos & Photographs To Keep You Up ALL…